Начало / In English / “Leadership Secrets of the Rogue Warrior: A Commando’s Guide to Success “ -modern take.

“Leadership Secrets of the Rogue Warrior: A Commando’s Guide to Success “ -modern take.

Have you heard about SEAL Team Six? If you haven’t, well, these are the semi-humans, semi-combat-machines that took Ben Ladin down in “Operation Neptune Sphere” (but also have been dropped in the hottest war conflicts as of in Bosnia, Somalia, Afghanistan, Iraq, etc.). 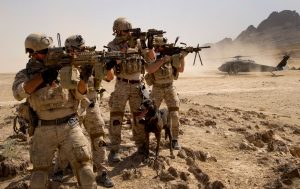 ~Ladies and/or non-military fans you can skip the intro and go directly to the 7 rules of leadership below, however that will make a baby Koala cry — at your own risk~

No surprise that no widely available information is at hand as these boys are the United States military’s premier counterterrorism units. As their actions are not to be commented by the White House nor the Department of Defense, also known as the United States Naval Special Warfare Development Group (NSWDG), this is the elite of counterterrorism welfare. This article is about the father of the SEAL team Six — Richard Marcinko. He knows a thing or two about leadership…read on!

A Slovak descendant, born in 1940 in Lansford, Pennsylvania, Marcinko was a badass since early childhood — dropped out of school and tried to enlist in the United States Marines, who rejected him due to a lack of a HS diploma. He made it eventually and started out as a radioman quickly moving to the Underwater Demolition Team and joined the SEALs after that. He had, actually, obtained a a bachelor of arts degree in international relations from Auburn University and a master of arts degree in political science from the U.S. Naval Postgraduate School (I am most positive that underwater demolition is the greatest form of art). Marcinko was known as a wild beast with a sharp mind. He was a rare mixture of physical and mental strength combined with one truly remarkable ability — his charismatic leadership. It came as no surprise that it was precisely Marcinko who created the elite SEAL Team Six.

When Marcinko ended his military career he quickly became famous for his taught leadership education (the fact that he was sentenced for 21 months for conspiracy against the U.S government helped his media presence). His book “Leadership Secrets of the Rogue Warrior: A Commando’s Guide to Success “ became an instant bestseller. His preaching is simple and brings it all down to :